The Second Session of High School Indoor League is Underway!!

When it becomes too cold to play outside, field hockey players come indoors to play! This winter Koa is hosting its 2nd season of High School Indoor League. The league consists of two 6 week sessions, where high school players come to practice and play during the off-season.

The games started with two Koa house teams, Koa Green vs Koa Black. The game ended with a win for Koa Black with the final score 2 -1! BCC Gold came out to win their game on Sunday. They played against Metro Teal and scored 12 goals, which gave them their first win for the season! The final game ended in a tie. Two evenly matched teams, Koa White and Northwest, battled the whole game. The final score was 4 – 4 giving both teams a tie for their first game. 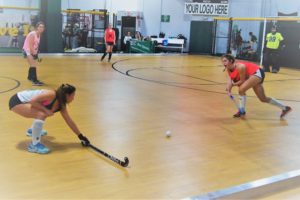 Next week we have all the teams playing a new opponent! Check back next week to see who comes out on top!
0comments
Share