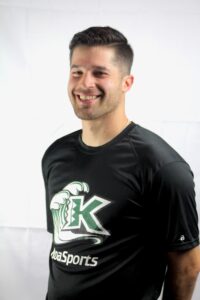 Hailing from Bergen County, New Jersey, Andrew spent a large portion of his childhood in London, England before returning to the US and arriving late to the game of baseball at the age of 11. After competing in track, baseball and football in high school, he went on to play club baseball at Sacred Heart University. Andrew graduated from Sacred Heart with a bachelor’s degree in Sports Management.

Andrew started his baseball coaching career in 2014 as an academy instructor for Rob Debrino (Drafted by the Minnesota Twins ’92), and as head coach for various town and travel teams in New York and New Jersey. In 2017, he had the opportunity to play baseball overseas in Rome, Italy for S.S. Lazio, where he hit .340 and lead the team in slugging percentage and stolen bases. Andrew joined Koa Sports in February 2018 as a coach and instructor, before moving to the front office and then becoming the Director of the baseball program in January 2019.