Welcome back to another edition of Around the Horn. From no hitters to extra inning thrillers, week 3 had a lot going on!

Another tough weather weekend for Koa Travel Baseball. Our 14U West team had a rare Saturday game and got the win, while our 11Us battled mother nature (on Sunday) and played two games on turf. Great news for the Koa Baseball Program, Tim Mansfield has started his career with Koa! Coach Tim played at High Point University (D-1), and recently finished playing professionally in France. He will be our hitting guru moving forward, he’s also the head coach of Koa’s 12U Team. Keep an eye out for Tim at Koa HQ.

11U- 0-2 Koa dropped the first game to DC Dynasty’s Red 11Us.
Koa collected 5 hits to Dynasty’s one but was not victorious in their effort. We got things started in the first inning. Curtis G. drive in two with a single. Jayson C. toed the rubber and went 2 2/3 innings allowing two runs on zero hits and striking out 4. Sean B threw 1 1/3 out of the bullpen. Jayson C went 2-2 at the plate leading the way in game 1.

We lost the lead late in a 6-3 defeat to Wild Bill. The 11us offense was sparked in the first inning when Jacob E. grounded out on a hard-hit ball to right field driving in a run. Evan K started the game, he allowed 2 hits and 4 runs over 2 2/3 innings and struck out 4. Leo P threw 1 1/3 in relief out of the bullpen. Leo, Evan, and Jacob all had an RBI for Koa.

12U- 0-0 RAINED OUT
Important Team Info- Coach Tim has returned from France and is ready to start his career at Koa Sports! We are excited for him to get to know everyone. Our league is looking into getting lit fields to play mid-week make ups, more to come on this.

13U- 0-0 RAINED OUT
Important Team Info- We are working on getting lit fields to schedule mid-week NVTBL games.

14U East- 0-0 RAINED OUT
Important Team Info- We are working on getting lit fields to schedule mid-week NVTBL games. Friday practices are now 5:30-7 pm.

14U West- 1-0 Saturday 0-0 RAINED OUT Sunday
Koa took the early lead, 4-2 after 3 innings. Burke scored 3 runs in the 5th inning to take a 5-4 lead, and we answered back with 3 runs of our own in the bottom half. We tacked on another 3 runs in the bottom of the 6th to win 10-5. Oree Y started on the bump and struck out 2 in 3 innings of work. Kenny Q had a good day at the plate going 3-4 with 4 RBIs. Jack F. saw his first game action on the mound and successfully closed out the game. The threw 2 innings and didn’t allow a run, great game all around

JV- 0-0 RAINED OUT
Important Team Info- Games are schedule through 10/14. Please note we are at Landon School on Friday for practice from 5:30-7 pm due to RM’s Homecoming. I’m also working on getting lit fields for weekday make up games.

Bees 16 – Riverdogs 8
Bees player of the game, Max R., stepped onto the mound with a dominant performance. Max allowed 1 run over 2 ⅓ innings on the mound, while also excelling offensively, going 2-2 with a RBI and adding 3 more stolen bases to his total.
The Riverdogs were not all bark. They had a big bite and fought hard to stay in the game. The Riverdogs starting pitcher, Jai P., earned player of the game for his team, which included his amazing defensive efforts after his transition to catcher in the later innings.

Legends 16 – Lugnuts 3
The hot bats of the Legends exploded in a dominant team win for their third victory on the young season. Elliot R. led the way offensively going 3-3 with a home run and 2 RBI. For the third game in a row, the Legends played a fantastic game defensively to extend their errorless streak to 13 innings. Player of the Game: Elliot R.: 3-3 with a home run, 2 RBI and 3 runs scored.
The Lugnuts fought hard the entire game. Pitcher, Albert L., escaped a bases loaded jam in the 5th inning with a inning ending double play that gave his team a needed boost of energy.

Game 1: Lookouts 11 – Blue Wahoos 12
The Lookouts went up 9-0 in the first couple innings thanks in part to Lookouts’ player of the game, Jack G.. Glider went 3 for 3 at the plate with a triple, and 3 runs scored. However, it wasn’t enough to stop the Blue Wahoos, who battled their way back in the later innings. A great performance by Wahoos’ player of the game Jake R. on the mound to stop the bleeding and got the walk off- game winning hit later that same inning.

Game 2: Blue Wahoos 6 – Lookouts 16
Game two had a very similar start to game one. The Lookouts took a commanding lead in the first inning, scoring 11 runs. Player of the game, Jack G.’s hot bat carried over to game two contributing another triple/3 run game. This time he dominated more than just offensively, as he added 3 inning pitched with 7 strikeouts, combining with other members of the team to complete a no hitter. For the Blue Wahoos, Alex B. came on in relief to hold down the Lookouts as best as he could with 4K, 2 Walks and 2 earned runs, earning him player of the game honor for game two.

Game 1: Thunder 12 – Bay Sox 11
Thunder’s player of the game Michael K. delivered in the clutch with a walk-off RBI single to win the game for the Thunder. The Bay Sox made it a thriller, as the lead changed hands numerous time in the late innings. Bay Sox player(s) of the game Eoin S. and Isaac M. both pitched exceptionally well over 4 innings to keep the Bay Sox in the game.

Game 2: Bay Sox 10 – Thunder 9
After trailing 2-9 through 3 innings, Max F. came on to shutout the Thunder over the final 3 innings. His Bay Sox teammates got behind Max’s dominant effort and rallied back with triples from Jackson F. and Zach W. Max F came to the plate in the bottom of the 6th and secured his team’s win with a walk-off hit to earn player of the game honors. The Thunder’s player of the game, Ben E., pitched well in his first AA start and made some amazing plays at both center field and shortstop.

Game 1: Biscuits 9 – Drillers 8
The Drillers gave it their best shot to get their first win on the season but ultimately couldn’t hold off the undefeated Biscuits. Player of the game, Logan J., threw 4 no hit innings, but it wasn’t enough as the Biscuits capitalized on some big hits by their player of the game, Aaron K.

Game 2: Drillers 7 – Biscuits 26
Biscuits continued their undefeated streak with another red hot start. With a single, double and 5 RBI, Jeev S lead the charge offensively to put the Biscuits ahead. Connor M.’s 2 run single sparked a valiant comeback attempt, the Drillers couldn’t claw their way back for the W.

IronPigs 11 – Tides 3
With 3 costly errors and a tough time holding runners on, the Tides gave up 8 runs in the first. The Iron pigs had some timely hard hits combined with Iron Pigs player of the game, Liam Connor’s 3 scoreless innings, which proved to be the difference in the game. Tides’ Declan O. and Ian A. earned player(s) of the game honors.

Movers 13 – Redwings 1
Wells and Ari pitched a combined no hitter making them this week’s players of the game for the Movers. Wells cruised through the first 3, recording 6K’s. Ari closed things out with 4K’s

Bulls 7 – Mudhens 7
The Bulls played another exciting game this Saturday against the Mud Hens. Falling behind early, the Bulls rallied for 3 runs in the final inning to tie the game. As the two teams battled, game length forced the two to end in a tie. Bobby B. was the player of the game for the Bulls, pitching 3 outstanding innings in relief. For the Mudhens, Brandon A. went 2 for 3 with a single, double and 3 RBI. 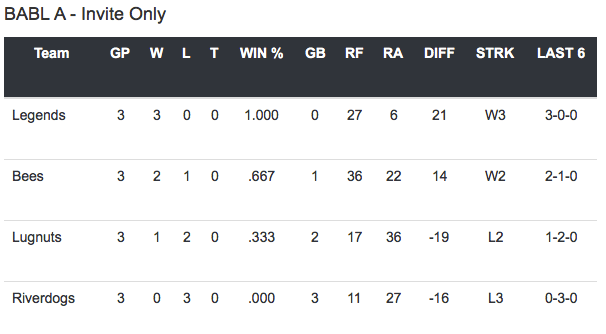 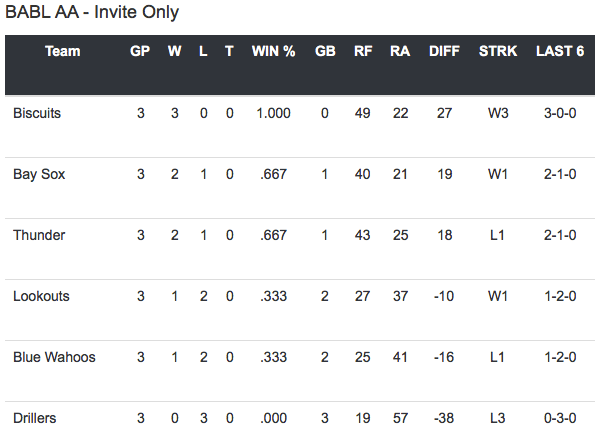 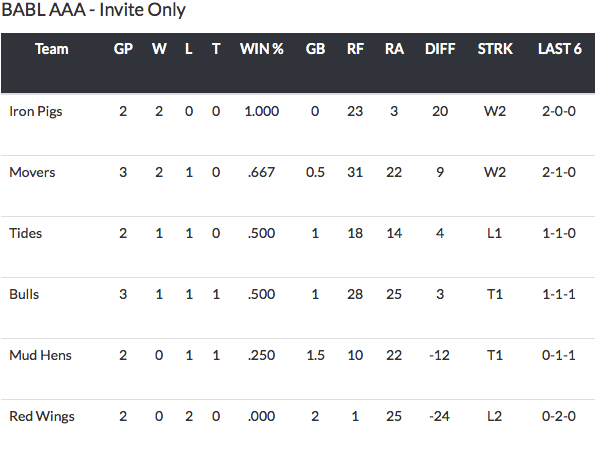