Around the Horn – Fall Week 4

Koa Travel 11u squared off with Wild Bill 11u in the first of their two games this weekend. In a tight match up, the score was knotted up 6-6 in the bottom of the 4th when William K. broke the tie with 2-run double. William K. and Jacob E. finished with multiple hits, and the team combined for seven total hit in the contest. Jayson C. started the game on the mound for Koa 11u, and managed to get through 3 innings with 4 strikeouts, keeping us in the game. Curtis G. and Matty S. combined in relief to finish the game for Koa and a 13-9 victory.

In game two, Koa claimed a 15-3 victory over the Win Within Tribe, thanks to a huge seven-run 5th inning. Evan K., Leo P., William K., Jacob E., and Sean B. each contributed an RBI in the big inning. Jacob E., Evan K., and Jayson C. finished with multiple hits in the contest, leading the offensive charge. Evan K. also dominated on the mound, throwing 3 innings, giving up 0 runs on 1 hit and striking out 6. Astoundingly, Koa 11u stole a combined 13 bases as a team.

Game one featured a tightly (lost 6-5) contested game between Koa Travel 12u and Wild Bill 12u. Despite valiant pitching performances from Tommy B. and Vince A., Koa lost on a walk off fielder’s choice with a questionable call at the plate. The team swung the bat incredibly well, consistently hitting the ball hard to the outfield, although not getting much to show for it in the box score. However, Zach R. had the highlight of the day, roping a ball deep into the gap for an inside-the-park home run.

Koa faced a good team in the form of Win Within Tribe in game two. Win Within threw three of the better arms at this age level, but Koa didn’t let that stop them from having an aggressive approach at the plate. While managing to put runners in scoring position in almost every inning, Koa just couldn’t come up with the timely hit. The team continued to hit the ball hard at the plate–Henry E. hit a ball long over the center fielder’s head, with only a single to show for it due to runners having to tag up. Henry E. was also solid on the mound. Connor K. stood out defensively, making every play that came his way. We dropped this game 12-1.

Koa 13u squared off with Kidball in a double header on Sunday. While Koa matched Kidball in hits in both games, Kidball came away with two victories. In game one, Caleb K. took the mound and threw 4 innings, giving up 1 earned run. The score was 3-1 through 5 innings thanks to Caleb’s fantastic outing, but the offense couldn’t string enough together to come back, eventually falling 10-2.

In game two had a forgettable start for Koa, surrendering 8 runs in the first 3 innings. Although the final score was 11-4, Koa outscored Kidball 4-3 over the games remaining 3 innings, leaving the team with something to build on for the next weekend. Mason R. was a bright spot for Koa coming in to stymie the Kidball offense after the 3rd inning. Mason finished with a line of 3 innings, 1 run, and 2 strikeouts.

Koa 14u West took both games of their double header against Arlington Senators Central. In the first game, Arlington took a commanding 8-2 lead after 3 innings. However, Koa chipped away and scored runs in the 3rd, 4th, and 6th innings to tie the game going into the 7th. Cody P. finished off an outstanding day at the plate and on the mound with a walk off double to win the game!!! Cody finished with 4 RBI at the plate and 4.1 scoreless innings on the mound, stud performance.

Koa wasted no time carrying over the momentum from game one, scoring 6 runs in the 1st inning. Despite persistence from Arlington, Koa was able to hold them off and win by a score of 12-8. Elliot B. finished 2-3 at the dish with 3 RBI. Great sweep.

The JV travel squad were strong in game one, but couldn’t squeak out a victory. They lost by a score of 5-3. Zach M. was solid behind the plate, throwing out two would be base stealers, one at 2nd base and another one at 3rd.

In game two, Koa took an early lead and never looked back. They took the contest by a score of 15-3. Jeff B. was a catalyst at the plate with 3 RBI, while Sam P. was strong on the mound for Koa, piling up 4 strikeouts.

Legends 10 – Bees 8
The first place Legends got off to an amazing start, pushing across 10 runs to take a commanding lead after the first two innings. Down 10-2, the Bees were not ready to give up as they mounted a furious comeback over what would be the final 2 frames to pull within 2. Unfortunately time was not on their side, as the Legends narrowly secured a 10-8 win with the game being called for time after 4 innings. Bees player of the game, Jacob G., lead the team’s comeback bid, pitching 2 scoreless innings with 4 k’s. The Legends player of the game was Eric F., who extended his on-base streak to 9 straight plate appearances to start the season.

Drillers 11 – Blue Wahoos 12
Drillers player of the game, Collin L, drove in 3 runs and played an outstanding game behind the plate as the team threw their first no-hitter of the season. Despite being held out of the hit column, the Blue Wahoos were rewarded with their patience at the plate as they scored all but one of their runs on walks and passed balls. Rowan H. earned player of the game of the Wahoos, as he drove in the team’s lone RBI with a sacrifice fly and had solid contact at the plate all game. 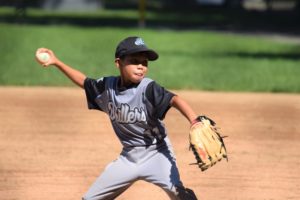 Thunder 9 – Lookouts 8
Battling back and forth throughout the game, late mistakes on the basepaths allowed the Thunder to steal a narrow win. Lookouts player of the game, Gabe S., pitched 2 solid innings and collected 2 hits at the plate. For the Thunder, Teddy B. lead the offense with 3 hits and 4 stolen bases.

Biscuits 11 – Baysox 10
After a tightly contested game, the Biscuits pulled out a walk-off win to move to a perfect 4-0 to start the season. Down 4 runs in the final frame, timely hitting and great patience at the plate sparked a classic comeback win. Max F. earned player of the game, throwing 2 solid innings and driving in key runs late in the game. Arhaat S. kept the Baysox in the game, stepping to the mound and shutting down the opposition in the later innings.

Iron Pigs 19 – Mud Hens 5
The Iron Pigs dominant start to the season looked to be in trouble after a rough first inning saw the Mud hens jump out to an early 5-run lead. The Iron Pigs battled back and eventually broke the game win open to cruise to their 3rd win of the season. Jake S.’s inside the park home run lead the comeback to earn him player of the game. Brandon A. went 2-3 and drove in 2 runs for the Mudhens in the loss.

Tides 7 – Movers 6
The Tides took an early 3-2 lead, but struggles on the mound saw them fall behind in the later innings. After a hotly contested game and down 6-4, the Tides battled back and pushed across the deciding run on a passed ball to eke out the win. Movers’ player of the game, Wells T. pitched 4 solid innings and left the game with the Movers in the lead. Player of the game for the Tides was Anthony C., who threw 4 shutout innings in the victory.

Bulls 7 – Red Wings 2
The Bulls collected another W as they moved up within one game of the first place Iron Pigs. The team fought hard for a 7-2 victory, despite the strong effort of Red Wings’ player of the game, Luke R, who pitched 2 shutout innings. The Bulls were lead on the hill by Benji E. and Jack S., but it was Will M’s great day at the plate that earned him player of the game. 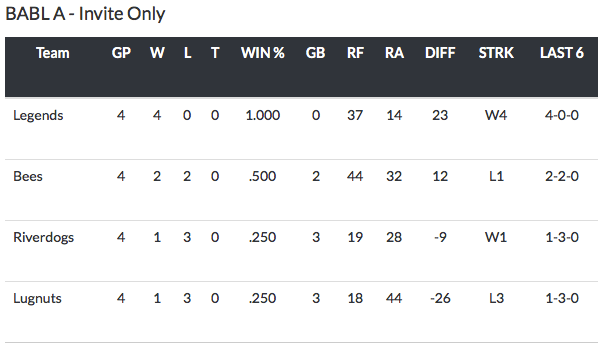 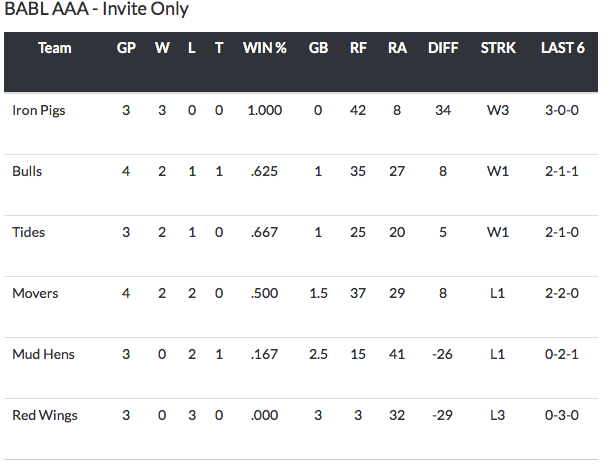