Around the Horn – Week 5

The Koa Fall season is moving full speed ahead! After some tough rain outs in the early weeks, every team was on the field from BABL to Travel tournaments this past weekend. Below you will find scores and recaps for all the action, plus a great instructional hitting video from 12U Travel’s Coach Tim!

Koa Travel 11u opened tournament play against Hughesville Hustle 11u, playing to a 7-7 tie It was the most heartbreaking tie of all time, Koa was down in the bottom of the fifth inning, before igniting a multi run rally, including William K. RBI fielder’s choice. Jayson C., Alex C., Leo P., Reed S., Andrew J., and Blake G. each had a hit in the contest to lead Koa offensively. With 1 out in the bottom of the last inning we “should have” walked off with a walk, we celebrated a little early and the umpire called out the would-be winning run because he was touched before he tapped home plate. A tough, and good lesson to learn.

In Saturday’s second game, Koa 11u took on a tough Olney Pirates 11u team. A Olney home run in the first game them an early lead, and despite everyone battling hard, Koa couldn’t recover in a 10-0 defeat.

In Sunday’s bracket play, Koa 11u were down early to Hughesville Hustle 11u. Down four runs in the 4th inning, Koa kept pushing runs across up until the last inning where their comeback fell just short. The final score was 5-4. Sean B. had a game tying RBI knock in the third inning, and Reed S. kept the game close as the starting pitcher. Andreas J. finished up the game out of the bullpen, tossing 2 ⅔ innings.

Koa Travel 12u had a disappointing start on Saturday, losing both games 15-0. Although the scores were lopsided, Eli B., Will Z, Logan Z, and Tommy B. all did a great job pumping strikes throughout the day. Logan Z. and Will Z. each had a great base hit up the middle. Whether it was at 2nd base or shortstop, Connor K. was incredible in the field. After game one, the umpire went out of his way to give Connor the game ball for his outstanding energy and defense.

Turning things around in bracket play, Koa 12u played the #1 overall seeded Canes. The final score was 8-1 in favor of the Canes. Even though the score didn’t favor Koa, the offense had runners on in almost every inning, and the team played with a totally different attitude. Henry E. made 3 diving stops at shortstop, and Eli B. caught one of his best games of the season. Aitan Y. and Will Z. had great at bats all weekend.

In game one of the tournament, Koa 13u had a shaky start, giving up 6 runs in the first two innings. That didn’t hold the offense up, as they responded with 4 runs of their own. JB H. pitched a great 1-2-3 inning in the 3rd with time limit quickly approaching. Koa was able to push across 3 runs in the bottom half to win the game as time limit expired.

Game two featured a much better performance on the defensive side of the ball for the first 4 innings. Mason R. started his first game of the year, finishing with 4 innings, 3 ER, and 2 K’s. Even though the final score, 10-2, didn’t favor Koa. Offensively, they were barreling balls up and down the lineup, hitting line drive after line drive right at people.

Bracket play was very kind to Koa 13u as they won the consolation bracket championship! Game one saw Koa fall behind early to the Pasadena Eagles, losing 2-0 after two innings. However, an offensive outburst in the next four innings allowed them to win 8-2. Ben C. was sensational on the mound in his first every travel ball start. Ben went a full 6 inning complete game, throwing a no-hitter in the process.

In the consolation championship game, the MVP Terps jumped out to a 2-0 lead after 3 innings, stymieing Koa’s offense. After tying the game with a sac fly from Luke B., JB H. came in for relief and shut the Terps down, finishing with 4.2 innings pitched, 1 hit, and 3 k’s to take the game into extra innings. JB led off the bottom of the 7th inning with a base knock. Mason R. came into pinch run. With Luke B. up at bat, Mason took off to steal 2nd base. Luke then hit a missile that 2-hopped the center field fence, bringing Mason all the way around to score in walk off fashion and giving Koa the hardware!

In game one on Friday night, Koa Travel 14u East earned a 16-3 win. Andy S. threw 3 innings, allowing 1 ER and striking out 5. The team provided runs in every inning. Seth K. and Andy S. each had RBI triples, while Miles K. smoked an RBI double. Seth K. closed the game down, allowing one baserunner over the final 2 innings.

In game two, Koa 14u East faced some quality pitching and just couldn’t get the bats going in the loss. The final score was 6-0. Andrew P. finished with Koa’s only 2 hits in the contest. Paul W. started the game, allowing 2 ER over 3 innings. Michael D., Miles K., and Andrew P. combined to finish the game in relief.

In bracket play, 14u East got off to good start with a 4-2 win in a tight ballgame. Andy S. and Devon G. each doubled to drive in 3 runs for Koa. Miles K. threw the first 4 innings, only allowing 2 ER with 4 K’s. Michael D. closed the game with 2 shutout innings.

In the second game of bracket play, Koa 14u East just couldn’t string anything together, ultimately falling, 15-0. Seth K. finished with the team’s only two hits, while adding a stolen base.

Matched up with Canes-Nova in game one, Koa played well but couldn’t get much going. Cody P. struck out 3 in 2 innings pitched. The final score was 11-0.

In game two, Koa 14u West got a bit of revenge on the Bandits. The last time they squared up, the Bandits threw a no hitter against Koa. Things wouldn’t be so easy for the Bandits this time around. Tommy D. started on the mound and gave up 1 ER in 4 innings, striking out 5 and allowing 0 hits. Charlie G. went 2-2 with 2 runs scored and a RBI. Koa outmatched the Bandits, winning the game 8-2.

In bracket play, Koa had a tough go round. Gambrills took the game, 15-0.

The first game the bats never got going and we dropped the contest 6-0. The second game, the bats came alive and lost in extras 12-11. We came back from 5 runs down to extend the game and force extra innings. We showed grit in game 2!

Bees 6 – Riverdogs 9
After a tense, back-and-forth game, the Bees were ultimately left without their honey. Jae P. powered the offense with a bases clearing triple for the Riverdogs. Emmanuel C. of the Bees would respond with a triple of his own, but late errors proved to be the difference as the Riverdogs stole a much needed home win.

Legends 7 – Lugnuts 0
The Legends picked up their 5th straight win on the season with a 7-0 shutout of the Lugnuts. Zachary B., Adam K., Dom S. and Elliot R. combined to allow just 1 hit over 6 scoreless innings with 14 strikeouts. Player of the game, Nate B., collected the Legends’ lone base hit as the team collected a season-high 17 walks. James M. earn player of the game for the Lugnuts with is only hit for his team.

Bees 9 – Legends 6
The Legends looked to keep their dreams of an undefeated season intact with a mid-week match up against the second place Bees but unfortunately the Bees came out stinging. Bees player for the game Max R. was outstanding on the mound, keeping the game close as the team jumped out to an early lead. Nick G. went 1-2 and 2 RBI for the Legends as they tried to battle back in the late innings, but fell 9-6.

Baysox 22 – Lookouts 4
Runs came in bunches vs the Lookouts. Brandon R. was the player of the game for the Baysox, driving in 5 RBI and a 3 run home run. Nate M. threw two strong innings on the mound, and Zach W. threw a runner out at second. Connor A. made two great back to back plays to set the tempo defensively in the early innings.

Biscuits 17 – Blue Wahoos 11
Even with 8 total players, the Biscuits still managed to stay undefeated. Runs were at a premium for both team throughout the game A little league homerun on a drop 3rd strike by player of the game Stewart A. drove the Wahoos’ offensive rally, but it was just not enough. The freshly baked Biscuits remain hot as they put up 9 runs in the second inning. Player of the game, Michael L., pitched two strong innings and drove in 2 runs in the victory

Lookouts 2 – Biscuits 8
The Biscuits’ streak remained intact during a monday night game under the lights. Good pitching throughout the game kept the Lookouts competitive, but a few defensive mishaps allowed for the biscuits to jump out for the lead. Player of the Game: William H. 2 IP, 0 runs, 4k’s, 1BB in his first pitching appearance of the season. For the Biscuits, Jacob K. caught the entire game monday night and established himself as the team leader in another team win.

Tides 20 – Mudhens 4
Mudhens 6 – Tides 14
The surging Tides dominated in both ends of a doubleheader sweep of the Mudhens. Declan O, threw 3 shutout innings and went 2-4 at plate with 3 rbi. Brandon A. went 2-3 with an RBI for the Mudhens.

Tides 18 – Iron Pigs 6.
In a Monday night matchup between the top two team in AAA, the Tides took on the undefeated Iron Pigs. Tides player of the game Jake S. powered the team’s offensive explosion, driving in 3 runs at the plate to knock off the Iron Pigs 18-6.

Iron Pigs 12- Red Wings 6
In a back and forth battle, both teams were playing exceptional baseball until a decisive 4th inning from the Iron Pigs put them in front. Player of the game, Kris K., lead the charge with a 3 run triple to give the Iron Pigs the lead. 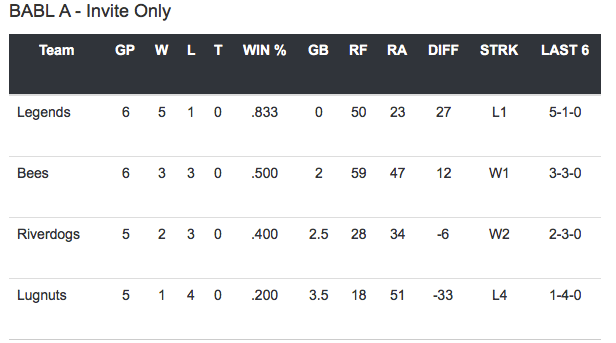 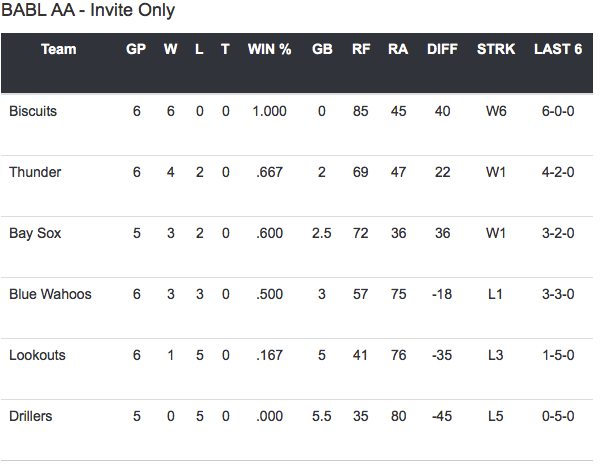 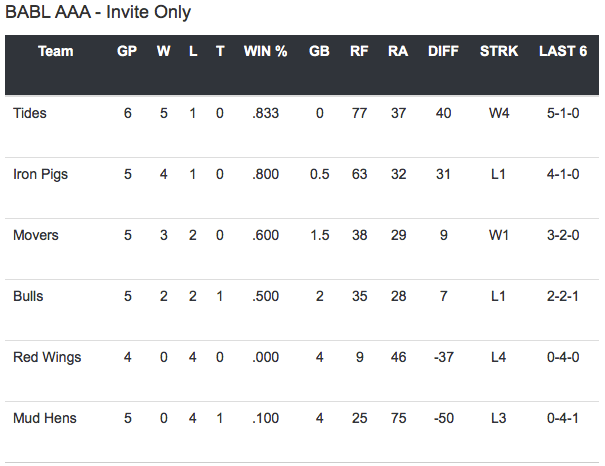