Around the Horn – Week 6

Another week of baseball is in the books! Despite AA getting rained out, the rest of BABL was in full swing as we march closer to our all-star games and the playoffs!

Please Note: If you are already registered for 2018 fall BABL, you DO NOT need to tryout again next week as you automatically have a league place for the 2019 spring BABL season. Your child will only need to tryout if they are looking to play travel baseball next season.

Koa’s baseball tip of the week comes from our fearless leader Mr. Tony Korson on how to play first base!

Koa Travel 11u played a double header vs. Wild Bill 11u on Sunday. In game 1, Koa won 11-7 thanks to a huge 5-run inning. Koa tallied 6 hits in the contest. Offensively, the team was led by Jacob E., Evan K., Matty S., Blake G., each of whom drove in a run. Andreas J. did a good job on the mound, allowing 4 runs on 1 hit, striking out 3 in 3.2 innings of work. Reed S. finished out the game in relief, throwing 1.1 innings. Game 1 ended with an amazing, diving catch by Leo P. playing second base. I bet Leo remembers this play for years to come.

Although we stayed in the game until the very end, Koa couldn’t come out on top in game 2, losing 12-9. The team showed a lot of fight all the way through. Koa 11u continued to hit the ball well (5 hits on the day), led offensively by Matty S., Blake G., and Alex C. Evan K. was the starting pitcher and threw well over 3 innings. In Evan’s 3 innings he only allowed 4 hits and had 1 K. A lot of stolen bases for Koa, including Andreas J’s 4 swipes!

Koa 12u was also matched up with Wild Bill in a double header on Sunday. Game 1 featured a tight contest where defense and pitching were the keys. Koa scored 1 run in 4 of the first 5 innings, but couldn’t manage to hold Wild Bill off, dropping the contest 5-4. Koa played outstanding defense and put a lot of great swings on the ball. Tommy B. obliterated a ball to left field for an easy double, while also contributing a team-leading 5 stolen bases throughout the game. Vince A. was started on the bump and delivered what was probably the best start Koa 12u has had all season. Vince went 3.1 innings while striking out 5, allowing only 1 earned run.

In the 2nd game of the double header, Koa 12u played their most complete game of the season. With timely hitting and outstanding defense, Koa came back from a 4-1 deficit to win the game 8-5. After closing game one, Tommy B. carried over his success on the mound into game 2, throwing 3 innings before turning it over to Connor K, who was unhittable over the final 3 frames. Connor allowed just 1 unearned run. Zach R. roped a triple to right-center field (two-hopped the fence), Tommy B. added a couple more hits, and Tyler R. had the go-ahead RBI-single giving Koa the lead for good. Tyler R. was also fantastic in the field, making every play that came his way. In fact, in the 5th inning, Tyler made all 3 outs himself. We are building momentum heading into playoffs!

In game 1, Koa Travel 13u beat Dig In 13u by a score of 11-7. Koa was able to establish an early lead, jumping on top 7-2 after 3 innings. Two runs in the 4th and 5th each put the game out of reach for Dig In, giving Koa the victory. Andreas G. and Simon R. led the way offensively as both went 2-3 with a double. JB H. closed the game, throwing the final 2 innings. He had 4 K’s.

Game 2 did not go the same as Game 1 for Koa. Dig In took the game 13-2. Koa finished with 7 hits but just couldn’t get the timely knock to drive in runs. Errors and walks (12) hurt Koa in the end.

Koa Travel 14u East won game 1 on Sunday by a score of 3-2. Michael D. was dominant on the mound, finishing with a line of 5 innings, 1 earned run. Koa was trailing 2-1 in the bottom of the 6th inning before tying it up and then later taking the lead on a go-ahead RBI double from Andrew P. Up 3-2 in the 7th, Paul W. came in to shut the door and did just that. In addition to Andrew P., Jake R. and Miles K. had the other RBI for Koa.

Koa 14u East carried over the momentum from game one into game 2, jumping out to a 4-2 1st inning lead. Miles K. started and threw the first 4 innings for Koa. However, free bases and few errors, the lead trimmed down to 6-5. Eventually, Koa couldn’t keep the other team off the scoreboard, falling 8-6. Paul W. threw 2 scoreless innings of relief, making it 4 total scoreless innings on the day for him.

In game 1, Koa Travel 14u West won in convincing fashion, 13-0. After putting up 6 and 7 runs in the first and second inning respectfully, that was all that was needed to win in only 3 innings. Charlie G., Kenny Q., and Elliot B. all had 2 hits, 2 RBI, and 2 runs scored. Cody P. threw all 3 innings with 4 K’s, while not giving up a single hit.

Game 2 featured another offensive show from Koa 14u West as they won 14-6. Koa was up 6-5 after 3 innings and outscored their opponent 8-1 over the final 4 frames. Charlie G. went 3-3 with 2 RBI and 2 runs scored. Koa used a lot of pitchers to complete the game, and everyone threw strikes and did their job. It was a great performance in a game where the opponent just wouldn’t go away. Great sweep!

Koa JV lost two very close games on Sunday by scores of 8-7 and 12-11. Both teams deserved a W in both games, but Koa just couldn’t pull it out in the end. In game 1, Jeff B. earned Player of the Game honors after clearing the bases with a 3-RBI double. Even though they didn’t get the wins to show for it, the boys played outstanding from first to last pitch.

Riverdogs 9 – Legends 8
Seeing their undefeated streak come to an end last week, the Legends fell for their second loss in a row. After a back and forth game, the Legends found themselves up 8-5 in the bottom of the 6th inning. With 2 out and the bases loaded, Riverdogs’ player of the game Jae P. smashed a bases clearing triple and came around to score for the dramatic 9-5 walk-off win! Elliot R. took home player of the game honors for the Legends, going 1-3 with a 3-run homer.

Bees 20 – Lugnuts 5
The Lugnuts continued to push hard this season but fell short against the surging Bees. Lugnuts’ player of the game, James M., threw 3 solid innings of one-run ball and drove in 2 runs. Jesse N. lead the Bees offensive explosion, going 3-4 with a double and 3 RBI.

ALL BABL AA GAMES WERE CANCELED DUE TO WEATHER

Tides 12 – Bulls 13
The Bulls jumped out to an early 7-0 lead by the third inning by the 3rd inning behind strong pitching and some timely hitting. The Tides cut the score to 7-2 by the fourth before the Bulls added 4 more runs an inning later. The Tides provided a late-game surge that saw them almost make a fantastic comeback attempt, but couldn’t take it all the way. Tides Player of the game was Max S., who went 2-3 at the plate and played solid defense at shortstop.

Red Wings 6 – Mud Hens 8
Luke R pitched lights out for the first 3 innings of the game (8 ks, 0 er) which allowed the Red Wings to take an early lead against the Mud Hens. The Mud Hens struggled with mistakes for the first 4 innings before coming alive in the 5th for an exciting comeback win for their first of the season! Mudhens’ player of the game, Mateo L., went 2-3 with 2 RBI in the win.

Movers 5 – Ironpigs 11
Liam C. and Jake S. earned player(s) of the game for the Ironpigs. They each pitched a great game and were able to keep the Movers off balanced to secure the win. 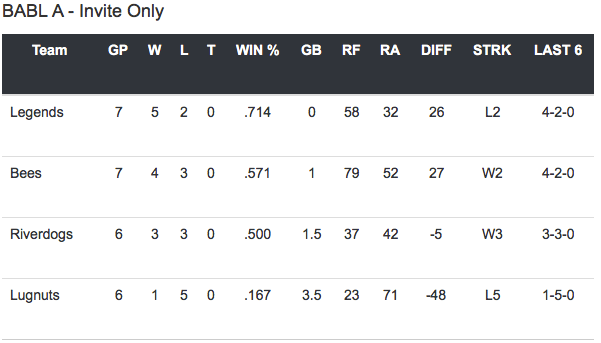 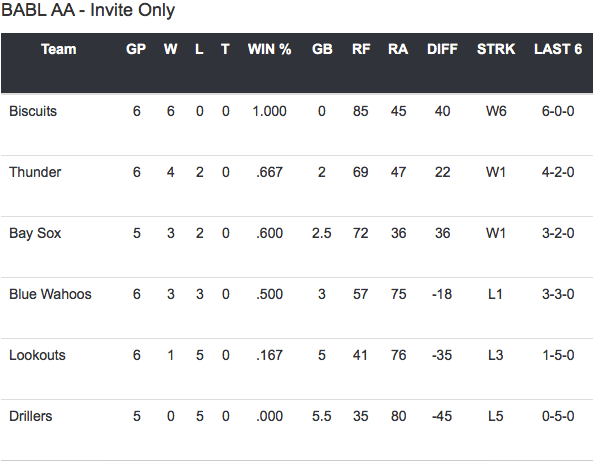 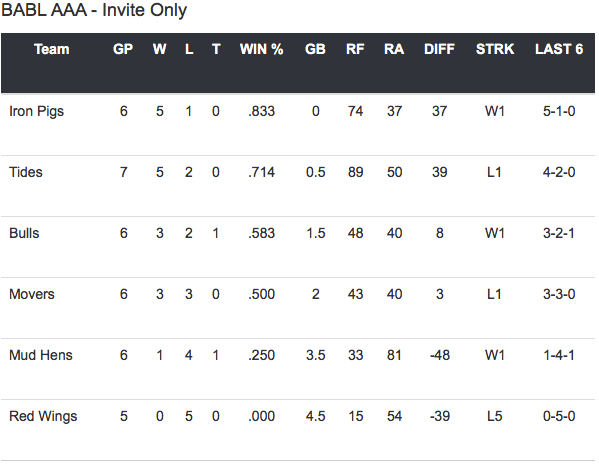 From The Athlete’s Perspective