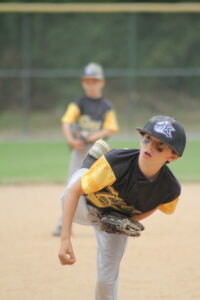 The great weather keeps on rolling! With some great match ups and games under the lights this week, our BABL teams look to close out the first month of the season strong.

Daily Dingers: None but the bats were hot this weekend!

Hot Rods defeated the Bees 21- 6. Bees came out swinging the bats early earning all of their runs, however the lack of strikes and momentum led the Hot Rods to timely hitting and patience at the plate. Drew J. from the Bees came in relief and pitched great along with going 2-3 with 3 RBI. Every player for the Hot Rods contributed to the big win. Asher B. pitched 2 strong innings on the mound. Erick B., Owen G., and Lincoln G. led the charge with 2 hits a piece. Caleb S. also had a bases clearing triple in the top of the 5th.

Hot Rods Player of the Game: Asher B.

Riverdogs won a tight 6-3 game over the Legends. The Legends bats took a little while to get going, however they fought back hard and started to put some pressure on in the late innings. It was the Riverdogs great defensive plays on the field that made the difference in the game. Topher T. and Daniel P. from the Riverdogs pitched a great came coupled with defensive plays from Nate W. and Grayson L. Shout out to Legends players Eric F. and Dominick T. with big extra base hits on the day!

Thunder lost to the Biscuits 18-3. Cameron D. started on the mound for the Thunder and pitched a good game with 2 strikeouts. It wasn’t until the 4th inning when Thunder got on the board when Grady O. delivered a double over the 1st base bag, scoring 3. Connor M. started on the mound for the Biscuits. Evan P. came in for relief and shut the Thunder down only giving up three base runners. The Biscuits won the game with solid defensive and no errors all game. Biscuits totaled 16 hits with Drew L., Grayson T. and Jonah P. leading the way.

Biscuits beat the Drillers 15-3. With the Drillers missing two guys, their defensive struggled to make plays. Ian L. for the Drillers pitched 3.1 strong innings. Luke W-N. started on the mound for the Biscuits only giving up three runs on two hits. The Biscuits bats came alive in the third inning scoring 9 runs. The inning was lead by hits from Luke A., Drew L., Connor M., Timothy V., Alexander B., and Grayson T. Joseph V. pitched a scoreless 5th inning for the Biscuits only giving up one walk and three strikeouts.

Bay Sox spotted the Lookouts 8-4. Great pitching and timely base running led the Boy Sox to their win. Taisei K. and Sean B. from the Bay Sox combined for 14ks on the mound. Taisei K. also led the way with 2 hits and 3 runs scored. Bay Sox players Freddy B. and Nathaniel T. flashed the leather with a couple of great defensive plays. Quinn W., John W. and Jay R. pitched a great game for the Lookouts. Shout out to Joe L. from the Lookouts for his great hit!

Tides lost a back and forth high scoring game to the Red Wings 18-13. Brayden R. led the Tides going 3-3 at bat with 2 doubles and 4 RBI’s. Henry S. pitched two solid innings for the Red Wings and Luke R. closed out the game on the mound with a 1-2-3 bottom 5th. Red Wings had a huge 5th inning scoring 12 runs with Simon J. notching 2 hits.

Red Wings defeated the Mud Hens 13-7. The Mud Hens started off hot, scoring 7 runs in the first inning. However, the Mud Hens lost their momentum and could not get their bats going again. Jacob O. had some great defensive players for the Mud Hens along with a couple of hits. The Red Wings bats were hot all game as Ryan Y., Nathan Y, Simon J., Anderson R., and Justin G. all reached base multiple times. Justin G. for the Red Wings triple highlighted a 6-run first inning.

The Bulls defeated the Iron Pigs 23-0 as two Bull pitchers combined to throw a shutout. The Iron Pigs could not get the momentum going at the plate. However, the Bulls secured the victory thanks to the 12 runs in the third inning. The Bulls bats were led by Robert B., Robert D., Will M., Noah W., Kevin Z., and Luke Porter., who all drove in runs. Zachary B. led to the Bulls to victory on the mound surrendering zero runs on one hit over three innings and striking out 9. Noah W. threw one inning in relief out of the bullpen. Michael L. went 3-for-3 at the plate to lead in the Bulls in hits. The Bulls didn’t commit a single error.

Bulls Player of the Game: Zachary B.

Hot Rods lost to the Legends 10-1. The Legends pitching was on fire throwing 15 strikeouts, Max A. with 9 K’s and Adam K. with 6 K’s. The Hot Rods also had great pitching by Ari G., Jake H., and Chase B. The Hot Rods made great defensive plays; shout out to Aaron S. for his diving catch at third base and Asher B. catching a pop up in fall territory. Erick B. was the only player to score for the Hot Rods on an RBI ground out by Jake H. From the Legends, Alex B. had a great 2 run triple and Nolan N. had 3 RBIs on 2 solid hits!

Hot Rods Player of the Game: Stay tuned for the rematch Wednesday Night