Outdoor field hockey fields are made of grass, Bermuda grass, field turf, or asto-turf depending on the level of play and location.  No matter the composition all regulation field hockey fields for the outdoor game are played on a 91.4 meter by 55 meter or 100 yard by 60 yard pitch.  For indoor the rules specify pitch length in the range 36 to 44 meters and width in the range 18 to 22 meters. The surfaces for indoor range from a gymnasium wood floor, vinyl or linoleum, or snap tiles.  Another big difference is that the sidelines are replaced with boards for the indoor game.  Players are allowed to use the boards to pass to each other (similarly to ice hockey).  The only time the ball is “out of bounds” is when it goes over the sideline boards, or over the end line (which are not lined with boards and are inline with the front of the cage).

Both indoor and outdoor sticks come in composite materials as well as wood, and composite allows for better ball control so we always suggest going with that option! They also both have the same basic shape with one round side and one flat side.  The biggest differences are that the end of the indoor stick is skinnier and the overall weight is much lighter.  In outdoor it is crucial for sticks to be heavier and have a thicker toe to accommodate powerful drives and slaps that are important when playing on a much bigger field.  The skinnier toe of indoor sticks allows for lifts to happen much quicker and easier, and the light weight makes it easier to control the ball while maintaining a fast pace.

The Team Size and Positions

Due to the pitch size in indoor being much smaller than the outdoor pitch less players are on the court at a time.  In outdoor there are 10 field players plus a goalie for a total of 11 players.  In indoor there are five players plus a goalie for a total of six players.  Positions vary from team to team but most outdoor teams are made of three to four forwards, three mid-fielders, and three to four defenders, while an indoor team could look like a five on a die, with two forwards one mid-fielder and 2 defenders.  In both games, all players are expected to move up and down the field with play, but this is especially important in indoor because the field is so small.

During Indoor, the flat and smaller surface allows for a much faster game.  The lighter stick is important for that reason and allows players to move, dodge, and shoot quickly.

The goal cages are the same size, many of the fouls are the same, the protective equipment is the same, but most importantly it is just as fun! Basically, indoor hockey is just like outdoor field hockey, but on a smaller field. The game is much smaller, faster, and more controlled because of the limited space and the ability to rebound the ball off the sideboards. The game is known to improve a player’s stick handling skills and vision on the field. If you’ve been playing outdoor field hockey, your skills can easily transfer over to indoor hockey. All you need to do is practice the basics skills.

Think you are ready to test your indoor skills? There are still a couple of spots left in an instructional clinic held at Stone Ridge on Saturday mornings.  Email Emily Voshell at emily@koasports.org for more information! 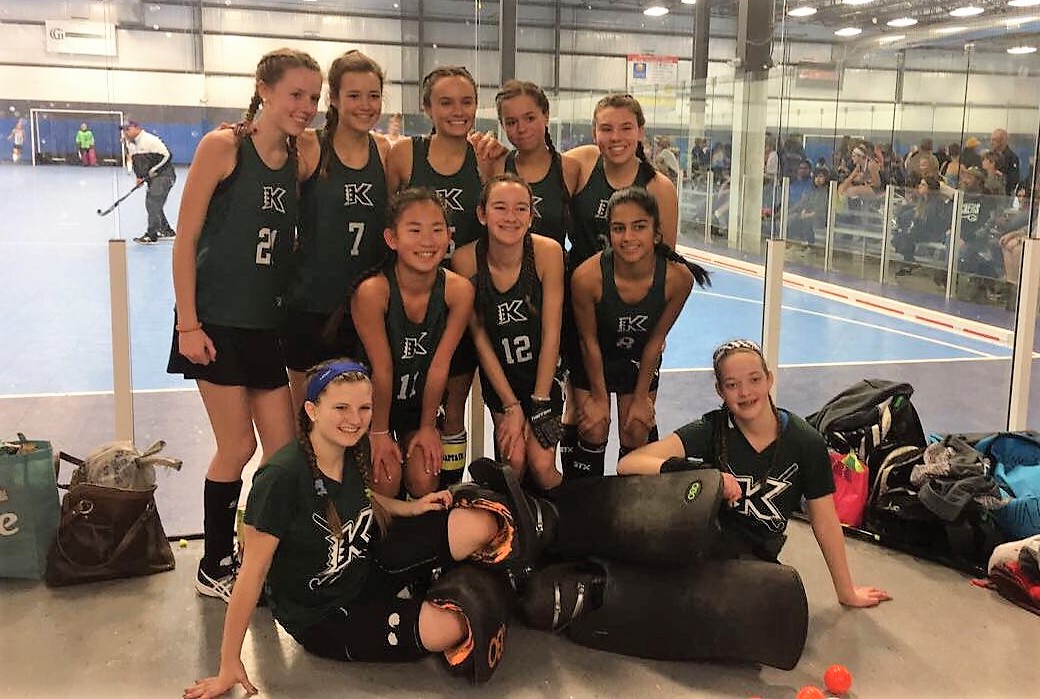 The Koa U16 Club team at their National Indoor Qualifier last weekend in Pennsylvania!