After an exciting and competitive first week of fall baseball at Koa Sports, we ramped it up even more for Week 2. With our BABL A and AA teams all getting their first tastes of double-header action, in addition to our regular BABL AAA and travel double-headers, there was no shortage of great baseball this weekend! The travel program had a particularly great weekend, with our six teams going a combined 9-3 with several sweeps! Here are the highlights:

Contrary to popular belief, sometimes baseball games CAN end without a winner and loser. And we got one in BABL A on Saturday morning. In one of the most well-played games that BABL will see this season, the Sluggers and Mashers battled to a tie with tough pitching, great fielding, and excellent baserunning on both sides. Teddy B. (2 IP, 1 ER, 4 K) and Leo P. (2 IP, 1 ER, 3 K) pitched well for the Sluggers and Mashers, respectively.

The Homers picked up their first win of the season with a convincing 14-3 win over a very good Bombers team. They were all about patience at the plate, as walks did the Bombers in – they surrendered only two hits but gave up too many free baserunners. Now that they’ve got their first win out of the way, look for the Homers to play more relaxed.

This game was a slugfest, with both teams putting up a ton of runs. However, the Mashers ended up on the right side of this victory, doubling up the Homers 22-11. Carter B. (two triples and six RBI) and Oliver H. (4-4, a double, and two runs scored) led the way, while Troy E. also recorded his first hit of the young season.

The Bombers looked much sharper in their second game, as the bats came alive en route to a 14-1 win. Ouest V. (3-3, 2 1B, 1 2B, 1BB, and 2 runs scored in the doubleheader, plus an inning on the mound) stood out on the stat sheet in both games for the Bombers and helped his team rebound in a big way. While not a lot went right for the Sluggers, Koa Sports recognizes the resiliency and toughness of Albert L. After getting hit in the face on a bad bounce and soaking his coach’s shirt in blood, Albert returned to the game an inning later to finish it out. Way to go Albert! 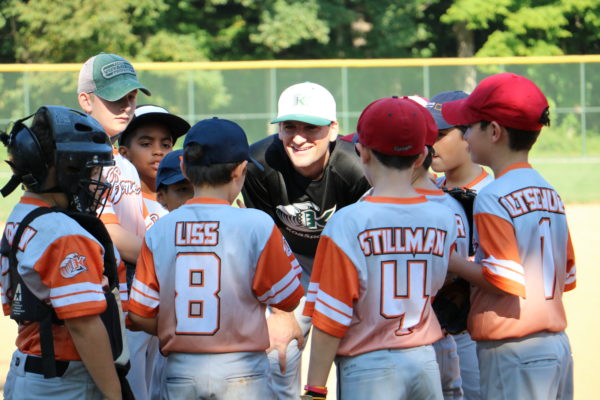 The Splitters were looking to build off their impressive win on Opening Day, and they did just that with a 10-7 victory over a good Screwballs team. The Splitters jumped out to an early 10-1 lead and were able to hold off a furious Screwballs rally to secure the victory. Eddie C. was commanding his fastball all day Saturday, as he threw an impressive 12 first pitch strikes.

Playing without their head coach, who was out of town for a wedding, the Fastballs still played hard in a double-header sweep. Things started off a little shaky for the Fastballs in game one, as they gave up two runs in the first, but they responded with four in the bottom half of the inning. They got up to a 6-2 lead but allowed factory to creep back in to make it a 6-5 game before Landen H. came in to shut the door.

In what wound up being the first of two wins on Saturday, the Movers proved to all of BABL AA that they are a force to be reckoned with, taking care of business against a good Sliders team. Robert B. twirled a gem on the mound, tossing, four shutdown innings to pick up the win. Watch out for the Movers this fall season!

The Changeups notched their first victory of the fall season in a wild 18-16 win over the Curveballs. There was no one star in the game for the Changeups – rather the team combined for 16 hits in the game, an impressive offensive outburst for a team whose identity lies with their bats. The Curveballs put together 11 hits of their own in a game that was eventually called only due to the time limit.

Another tie?! Yep, just like the Sluggers-Mashers game from BABL A, this AA game ended in a draw. The Splitters found themselves down early in this one but had just enough offense to fight their way back to a tie score before time was called due to the double header time constraints. Michael L. of the Sliders had a great pair of games, notching four hits with a run scored and an RBI.

A close one between the Fastballs and the Changeups, but ultimately the Fastballs came out on top to earn the win. The Fastballs jumped out to a 5-0 lead behind great pitching from Stephen W., who racked up five strikeouts in two innings. Despite the loss, the Changeups showed a lot of grit in this one, as they started with only nine players, eventually lost another in the second inning, and started the game off ice cold with the bats, yet still managed to tie the game in the 5th inning. Those hard-fought games, whether you win or lose, say a lot about your team.

The Movers got the Saturday sweep while the Screwballs suffered a minor setback in getting swept in an afternoon matchup that saw the Movers get the win. Aaron L., in a continuation of his stellar showing in the Movers’ first game,was a stud at the plate. Between the two games, Aaron finished 4-5 with a home run, four RBI, and four runs scored. That performance earned Aaron Koa’s Player of the Week honors! Congrats, dude!

The Curveballs got their first win of the season in their second game on Saturday, winning a high-scoring matchup against Baseball Factory. Garrison K. was the star on offense, going 3-3 with an absolute shot that hit the outfield wall with bases loaded. Cooper G. and Will K. pitched in on the mound and with outfield defense, respectively. Coach Josh Brooks loved the all-around effort this game and will be hoping to get more of the same from his team going forward.

In Week 2 of MNB, we saw a game that was much closer than the final score might suggest. The Splitters and Curveballs were locked in a tight contest up until the very end, when the Splitters were able to pull away to victory. Ben C. of the Splitters followed up an impressive Saturday at the plate with four innings on the mound Monday night. Jacob L. of the Curveballs shut the door the first two innings to give the Curveballs their first consecutive scoreless innings of the season. These MNB games under the lights have been exciting all around, and we hope to see more of the same.

In a wild one at Richard Montgomery HS, the Slammers defeated the Blasters in comeback fashion. After struggling to get going early on, the Slammers exploded for 16 unanswered runs. They combined patience and timely hitting to get their runs, highlighted by Sammy K.’s two-RBI triple and three total hits in the game from Jake S.

The Blasters avenged their loss earlier in the day, jumping out to an early lead against the Wreckers and never looking back. Haydn C. gave up a lone run in four innings of work while keeping his pitch count down, giving the Blasters a chance to get going offensively. Jack P. and Jack F. helped spark the team on offense as well, as the duo has taken nicely to the top of the batting order.

The Wreckers, looking to avenge their earlier loss, took care of business against the Slammers, dominating to the tune of a 24-6 victory. The Wreckers capitalized on the Slammers’ pitching while getting a solid pitching performance of their own out of Kenneth R., who looked downright unhittable at times. Roan D. pitched well and hit a triple in defeat.

Another close contest in BABL AAA, this one resulting in a walk-off win for the Launchers! In a back-and-forth game, the Launchers entered the bottom of the last inning down by one run, but scored two, including the game-winning run on a passed ball. They got a Herculean effort from Larry B., who pitched well and racked up two stolen bases. Elias G. was a terror on the bases as well, racking up three steals in the losing effort.

After struggling to find their footing in their first game, a 9-0 defeat against DC Dynasty, the 10U Green Wave exploded for a 13-1 romp in game two. Evan K. and Jacob E. paced the team offensively with two hits apiece. Meanwhile, Eli K., Koa’s Pitcher of the Week (congratulations, Eli!), threw an absolute gem, taking a no-hitter into the 5th inning and finishing with eight strikeouts in four innings of work.

Down but never out. The 11U Green Wave trailed late in both of their games to DC Dynasty, but rallied in both to earn their first sweep of the season. The bats came alive late in game one, as the Green Wave put up 10 runs in the 5th inning. Game two was particularly exciting – down by one run with two outs, Casey G. got the rally started and Matthew K. ended it with a walk-off, line drive single! 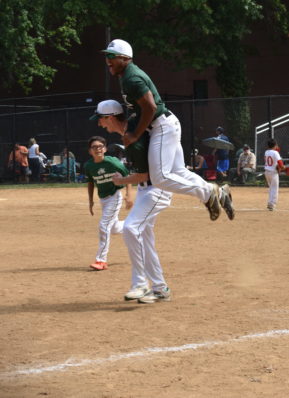 The players weren’t the only ones celebrating hard after 11U’s double header sweep. Check out Coach AJ and Coach Billy!

Total domination! It didn’t matter who the opponent was, they were no match for the 12U Green Wave, who showed no mercy in two routs. Game one saw the trio of J.B. H., Kanen K., and Andrew L. combine to go 5-9 with three doubles and 10 RBI. Then, in game two, the Green Wave actually got into a 2-0 deficit early, but fought back hard to get the win. Andrew showed his stuff on the mound, pitching four innings of one-run ball. Following two close losses last weekend, it’s nice to see the 12U team bounce back strong.

These are the games we love to see, hard fought, close, and fundamentally sound. The 13U Green Wave played two great games and came away with two well-earned wins. The boys executed their gameplan on offense – they were never down on themselves despite trailing in both games – and came up with clutch pitching performances from James R. in game one and Andrew P. in game two. That’s a 4-0 start for a team that’s clicking on all cylinders right now!

Like so many other Koa teams that failed to win their first game this weekend, the 14U Green Wave was able to bounce back and take their second game in a lopsided affair. It was a balanced hitting approach that helped put the NFC Knights away, with solid efforts put forth by Ryan R., Will P., and Dylan P., among others. Looks like the hitting practices are paying off!

Koa JV vs. Bradley Eagles 15U

The JV Green Wave got their first win of the season in game two of Sunday’s double-header against the Bradley Eagles. Sergio B. was like a Swiss Army Knife for the Green Wave, excelling at the plate, on the mound, and in the field. Defense was the key to their victory, as they only committed two errors in game two. That combined with a lights out game two pitching performance from Ari F. is what got them the win. They’ll look to continue playing good defense in next weekend’s matchup.

Koa 13U vs. Arlington Senators 13U American

Koa 14U vs. Primetime Aces 14 White/Springfield Sharks 14U