While we have no definitive proof of this, it appears that the kids in BABL saw the Thursday Night Football game between the Los Angeles Rams and the San Francisco 49ers, saw all the points those teams put up, and collectively thought, “let’s try to score as many runs as they did points.” And while no team reached the gaudy totals put up by those California teams, some came close. Every BABL game this weekend saw at least one team reach double-digit runs, and all but a few travel games did as well. It was a great weekend for those who love to see offense. Here are the highlights:

A back-and-forth nail-biter of a game in BABL A, but in the end the Bombers pulled out the win, defeating the Mashers 10-8. It was an all-around effort on offense for the winning team, as every single Bomber reached base! Wyatt R. and Jay P. pitched well for the Bombers, while Ethan H. shined in the field for the Mashers.

A big win for the Homers, who were in control of this game from start to finish. They were able to wear the Sluggers down when they were hitting, and weren’t shy about taking the extra base. The Sluggers unfortunately couldn’t get much going offensively, but it wasn’t all bad – Luke L. showed poise on the mound, striking out four batters in two innings.

In what can only be described as a blowout, the Mashers handily defeated the Sluggers in the first BABL A game of MNB. Offensively, the entire Mashers team stood out, with several players performing well at the plate and on the bases. Team morale was way up in this game. Teddy B. knocked in all three of the Sluggers’ runs and performed admirably on the mound as well.

Through the first couple of innings in the Curveballs-Splitters game, no lead was safe. The game saw four lead changes in the first two innings alone (!), but in the end the Splitters offense was just too much. Will F. (three hits, four RBI) and Eddie C. (CG, three strikeouts, 12 first-pitch strikes) paved the way for the Splitters, who look like a tough matchup in BABL AA.

What a day for the Screwballs, who got back on track with a resounding win over the Sliders. The big story of the game was Bobby B., Koa’s Pitcher of the Week. Bobby twirled a gem on the mound, firing four innings without allowing a hit or a walk while striking out 10 Sliders. That’s right, Bobby threw a no-hitter, with the lone baserunner against him coming via an error. What a terrific accomplishment for Bobby and his team! Congrats!

Baseball Factory notched their first win of the season, defeating the Changeups 19-4. Defense was a trouble spot for the Changeups, as they allowed several errors which led to runs for Factory. Matthew A., however, had a good day at the plate, getting on base in all of his plate appearances.

Give the Fastballs a ton of credit, as they trailed at three different points in the game yet still managed to win by a comfortable margin. Stephen W. had a day to remember, hitting an inside-the-park home run and closing the door on the mound with a looking strikeout to the Movers’ last batter. Landen H. kept his team in the game with his effort on the mound, while Eoin S. and Will G. did so at the plate.

A solid effort from the Wreckers, as they took care of business against the Dingers, winning 12-5. Ricky R. was impressive on the mound, striking out several Dingers while limiting the number of walks he allowed. Will J. was able to barrel the ball up several times, which resulted in two singles, and stole three bases on the day.

Despite what the final score might indicate, the Dingers and Blasters game was actually close for a long time before the Blasters were able to pull ahead for good. Haydn C. pitched well for the Blasters, allowing his team to find their offensive groove. More importantly, team chemistry is continuing to improve, which is good for a team that looks very strong in the early going.

The Blasters earned a sweep at Richard Montgomery HS with their win over the Wreckers. Declan O. had a great day between the two games, going 3-4 with several hard-hit balls. Jack F. had a quality start in the game, limiting what the Wreckers could do offensively. Ethan S. hit the ball hard in three plate appearances for the Wreckers, and although only one of them resulted in a hit, Coach Marty Bednar is happy with that effort.

A big-time win for the Launchers in this one, as they convincingly handled the Slammers. Cody P. epitomized efficiency on the mound – in his lone inning of work on the mound he retired the side on just seven pitches, five of which were strikes. The Launchers were aggressive at the plate and on the basepaths, leading them to victory. Roan D. pitched well in a losing effort for the Slammers.

It was a great Sunday for the 10U Green Wave, as they dominated Wild Bill 10U, outscoring them 34-4 over two games! Evan K. led the charge on the mound in game one, with Evan, Jacob E., Tyler R., and Reed S. getting some big hits with runners on to put the game out of reach. Game two saw more of the same, with Andreas J., Blake G., and Eli K. getting in on the action as well. Literally every player on the 10U team had an excellent day, and will be looking to continue this production throughout the season.

Game one started out well for the 11U Green Wave, as they got solid pitching performances out of the gate that they unfortunately couldn’t capitalize on. Game two was a different story. The bats were active early and often, with the big blow coming in the fourth inning, when they put up nine runs. Shane M., Henry E., and Adrian G. all exceeded expectations on the mound in the double-header, with Casey G. and Zach B. excelling in the field.

Two very different games for the 12U Green Wave this past weekend against DC Dynasty. In game one, the team found themselves down early, but showed resiliency and came roaring back, even briefly taking the lead, before Dynasty’s bats came alive again late. Game two was a different story – the offense was paced by Jay W., Kanen K., and Nate M., while Andrew L. shined on the mound, helping the team take the back end of the double-header. It was a great way to bounce back!

Koa 13U vs. Arlington Senators 13U American

Another sweep! The 13U Green Wave just can’t be stopped, as the take both games of their double-header yet again to remain undefeated on the season! Game one was close, but thanks to some lockdown pitching and just enough offense – highlighted by Zane G.’s walk-off – the Green Wave got the win. They jumped out to a big lead in game two, with Colin R. hitting a bases-loaded triple to bust the game open. Andy S. pitched well, and the team was able to stave off a late rally by the Senators. 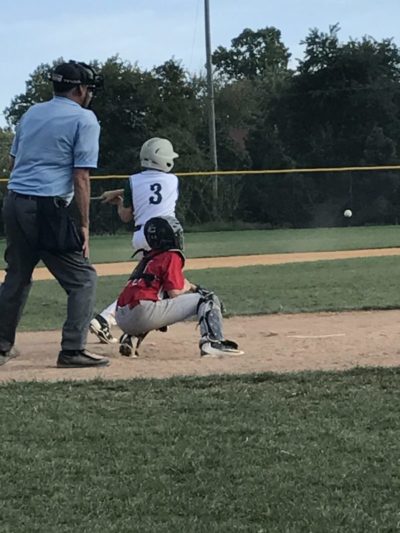 Zane G. with the walk-off for the 13U Green Wave!

Koa 14U vs. Primetime Aces 14U White/Springfield Sharks 14U

Sunday saw the 14U Green Wave, much like their travel brothers in 10U and 13U, earned a sweep on Sunday. Zach M. has taken well to hitting in the three spot in the lineup, while providing terrific defense behind the plate. But the whole lineup has been producing top to bottom, which bodes well for the team as they continue deep into the NVTBL season.

A few well-played games from the JV Green Wave that resulted in a split, as they took their first game before dropping the second. Game one saw Raymond A. pitch a beauty, with five solid innings, while Jamie A. was able to lay down a beautiful bunt in a key situation. Game two was a different story, though Dean W. did hit a moonshot triple to highlight what the team has been working on in practice.

Koa 11U vs. Loudoun South Eagles 11U Black

Koa 12U vs. Kidball Cardinals Red 12U

Koa 13U vs. Arlington Senators 13U National