As our BABL teams start to gear up for the playoffs, and our travel teams prepare for their end-of-the-season tournaments, all of us here at Koa Sports wish all of our teams the best as the season winds down. There’s a tendency to be tired by this point – we’ve played plenty of baseball over the weeks – but it’s important to keep pushing through. The extra adrenaline will help, but let’s all finish the season strong!

Here are the highlights from last weekend:

The Sluggers battled the Mashers in what was a close game at the beginning, but in the end the Mashers proved to be too much, pulling away in the middle innings. The Mashers took the lead due to some strong offense, as well as several walks given up by the Sluggers. Leo P. was the star of the game for the Mashers as he got on base every at bat, scored two runs, and pitched an excellent game! Zach D. had an overall good game for the Sluggers, and despite the huge loss, coach Miles Fisher was still able to instill in his players a desire to earn the playing time and positions they want. And both teams had cupcakes at the end. Because just because we’re trying to win doesn’t mean we’re not trying to enjoy the ride.

The Homers brought their bats with them against the Bombers, beating their opponent by double digits. Drew L. had a base clearing double to make it 6-3 in the third, signaling the turning point in the game. The pitching held up as well, with Arhaat S. recording the final six outs on his own. Wyatt R. fought valiantly on the mound for the Bombers, striking out six in two innings, and hit well at the plate, but it simply wasn’t enough. 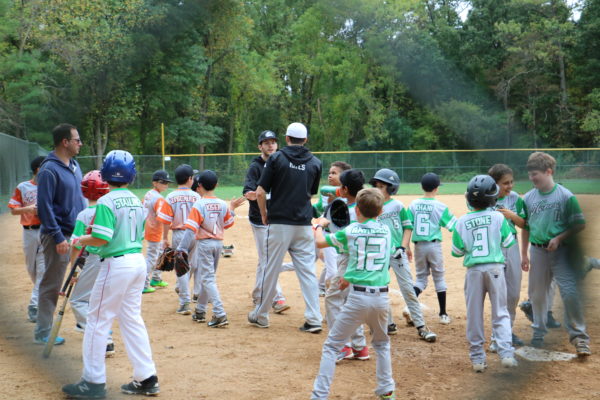 The Bombers and Homers line it up following their game.

In a makeup game that was rained out last weekend, and a rematch of the game they played on Saturday, the Bombers got their revenge on the Homers with a 13-8 win. This was a truly exciting game under the lights, as it went back-and-forth between two great teams! Jay P. went 2-3 at the plate with a 2-run HR (!!), a triple, and three runs scored. Wyatt R. also went 2-3 at the plate with a grand slam (!!!!), a single, and three runs scored as well. But it wasn’t just those two – every Bomber got on base via a hit or a walk at least once.

This game was much closer than the final score indicates, as the Screwballs and Curveballs were tied heading into the final inning, before the Screwballs pulled away in the sixth. Lance H. and Logan Z. combined for seven hits from the top two spots in the order, but every spot contributed, with Jeremy G. and Jackson B. in particular earning praise from coach AJ Avant-Johnson when he recapped his game.

In a fierce pitching matchup, the Splitters were locked in a pitchers duel, tied at two after three innings. Once the Fastballs’ flamethrower was off the mound, the Splitters capitalized with quality at-bats, a stinging double by Josh S., and a few lucky breaks. Luke R. pitched exceptionally in relief, striking out three batters in two innings, allowing only one run. The Splitters would tack on two more runs in the top of the sixth , before the Fastballs went 1-2- 3 to end the game. The Fastballs were sloppy in the outfield, but drove in all runs with two outs with great approaches and tough at bats.

The Changeups added another win to their ledger with an outstanding overall performance against the Sliders. Harry R. and Nate L. pounded the zone and held the Sliders’ bats in check, and helped rack up the runs along with Michael K. The team played fundamentally sound baseball and got rewarded for it.

Another tie. Baseball Factory got out to a 7-2 lead, but the Movers kept chipping away in a team effort. The last inning was one to remember. With a tie ballgame, runners in scoring position, and one out, Factory’s centerfielder flashed the leather, making two spectacular diving catches to save the game and preserve a tie.

The final Monday Night BABL game of the season! This was yet another close one – a theme when BABL AA plays under the lights – with the Sliders pulling out a win against Baseball Factory. The Sliders got awesome pitching from Yousef Y., with Wells T. and Schroeder K. pitching well too. With a 4-1 lead in the last inning, Factory got two runs across the plate, but the Sliders slammed the door shut, with the last batter popping out w/ runners in scoring position.

The two top teams by record in BABL AAA duked it out in the first game at Richard Montgomery on Saturday morning, with the Blasters edging out the Launchers 14-12. Both teams combined for double digit walks, as a patient approach at the plate led to baserunners, who then ran rampant on the basepaths. Nico C. had a great day at the plate for the Launchers despite the tough, close loss.

The Blasters swept their competition on Saturday, following up their earlier win with a resounding victory over the Slammers. Jack F. pitched a beauty, as he limited the Slammers by painting the zone, recording multiple looking strikeouts. Offensively, the Blasters took a patient approach at the plate, which led to them producing baserunners, and thus runs. Eli W. and Roan D. both pitched well, but walks ended up doing the Slammers in.

The Launchers got revenge from their earlier loss, handling the Slammers 16-7. The Launchers jumped out to an early lead thanks to a patient approach at the plate and plenty of strikes thrown on the mound. Nico C. pitched well and smoked the ball at the plate, leading the way for the Launchers. The Slammers’ pitchers had a tough time finding the strike zone, as every player on the Launchers walked at least once.

In a close game all the way to the end, the Wreckers pulled out a win against the Dingers. George K. pitched three solid innings, while Jacob S. and Noah R. provided some timely offensive support to put the game away. Jake S. threw two runners from behind the plate for the Dingers, who played very aggressively throughout the game.

The 10U Green Wave took two against DC Dynasty, dominating in the first game and looking strong in the second game. Game one featured an eight-run second inning and an eight-run fourth innings, propelling the team to a big win. Several players had multiple hits and RBIs, while Evan K. and Drew J. held Dynasty’s bats in check. Game two was closer, but had the same final result. Reed S. had multiple hits and pitched very well in relief, and Tyler R. had a three hit game. Tyler is Koa’s Player of the Week (congrats, Tyler!), as the young man went 6-6 with four RBIs and five runs scored against his former team. Congrats, boys!

Having last week off for bowling looks like it might’ve helped loosen up the 11U Green Wave, as they looked relaxed in sweeping Ashburn. The bats were patient in game one, as the team drew 12 walks versus only three strikeouts, which led to baserunners, which led to runs. While they only tallied six hits, they were active on the basepaths, and put Ashburn in an early hole they couldn’t dig out of. Henry E. and Alex V. teamed up to limit the Rebels’ bats, recording seven strikeouts between them. In game two, the bats woke up a bit, but the team kept their patient approach. Shane M. struck out six in three innings of work, giving up only one hit and no runs.

Playing on the fields at the Washington Nationals Youth Baseball Academy in Southeast DC, the 12U Green Wave recorded two big wins after not looking their sharpest in their tournament play. The boys got out to an early lead in game one, as the Hustle allowed seven runs in the first inning, putting them in a hole they couldn’t get out of. Every player on the Green Wave either scored or drove in a run, with Massimo L. and Connor B. leading the way offensively. The team cruised to another easy victory in game two, as the Hustle didn’t score until the fifth inning. Andrew L. started and had his command going, throwing strikes 68% of the time while not allowing a run in four innings. Jay W. shut the door in the last two innings to preserve the game two victory.

Like their 12U counterparts, the 13U Green Wave were looking to avenge a lackluster showing in tournament play last weekend, and did just that against Burke, riding dominant pitching in both games to victory. Offense carried the Green Wave in game one, scoring runs in every inning combined with 18 stolen bases. James R. and Miles K. allowed three earned runs total to keep Burke down. That led to a great showing in game two, as Koa stole 14 bases en route to 16 runs. Andy S., Paul W., and Seth K. held Burke to three earned runs while giving up three hits total.

Fresh off a second place finish in the Columbus Day Showdown, the 14U Green Wave couldn’t take care of business in game one, but bounced back to take game two on a walk off, splitting their games against Manassas. The boys jumped out to a 2-0 lead after two innings in game one, but the bats went cold after that, as the Cavalry took a 6-2 lead in the middle innings. The Green Wave fought back in the last inning, making it a two run game, but that was as close as they would get. Zach M. pitched lights out in relief when his team needed him to, allowing no runs to keep the game close late. Game two ended in dramatic fashion – after Manassas rallied to tie the game in the top of the last inning, the Green Wave came to bat in the bottom half, where Dylan P. ended it with a walk-off single!

It was a tough weekend for the JV Green Wave, as they took two losses while playing short-handed. Too many walks and not enough defense led to early deficits that no amount of offense was going to be help erase. It wasn’t all bad – Eli P. went 3-6 on the day with three runs scored, while Josh P., pitching for the first time ever, got extended action in game two. Hopefully the guys will be able to bounce back as their season starts winding down.

Koa 10U vs. Great Falls Nationals 10U

Koa 13U vs. Metropolitan Senators 13U South/Potomac Riverdogs 13U

Koa 14U vs. Springfield Sharks 14U/Falls Church Colts 14U

Four innings, 35 of 53 pitches for strikes