The BABL regular season may be over, but we still had one final game on Monday night – our BABL AA All-Star Game! Like the BABL A and AAA games, this game was played under the lights at Cabin John Regional Park, with the players split up and drafted onto opposing teams by Koa’s baseball department and playing against each other similar to the AAA game. Not only do these athletes excel on the baseball field, they exhibit Koa’s four core values – positive, dedicated, team-first, and fun – both on and off the field. And what happens when you bring these young men to play all on the same field at the same time? You get one exciting game!

As the players made their ways to their respective dugouts for their pregame warmups – not just to get loose, but to get to know how to play with their new teammates – you could sense the excitement in the air. It’s not every day that you get to play with and against some of the very best our league has to offer, and we could tell the boys were itching to get the game going on the cold, drizzly Monday night. But before they took the field, each player and coach got their name announced over the speaker system, to the applause of everyone in attendance. After standing for the Star-Spangled Banner, the game was ready to commence. In between each half inning, we had music playing over the speakers and every kid who stepped up to the plate or onto the mound had their name read out on the speakers as well. By the end of the night, I had said so many kids’ names it was like I’d been coaching them myself all season!

The away team, playing from the first base dugout, jumped out to the early lead, putting up five runs through the first two innings. Whereas BABL games typically see plenty of walks and errors in the early innings, this time was different. The boys on the first base side came out swinging, putting the bat on the ball and forcing their way on base with solid hits, and working their way around the basepaths. The All-Star starters were a pair of Sliders – Yousef Y. and Wells T. Yousef struggled a bit but limited damage, while Wells pitched a shutout in his only inning of work.

After the first stretch of the game was in the books, the tide started to turn in favor of the third base side’s team. The first base side was not pounding the zone as frequently as they were early on, and the third base side took full advantage. After falling behind early, they came back to take a 7-6 lead in the fourth. Now trailing, the first base side needed to rally to get back into the game, and they did just that. Stephen W. (Fastballs), who you may recall hit a walk-off home run off the very top of the fence a few weekends ago, continued to display his immense power upside by tagging a ball that rolled all the way to the warning track. The triple set the stage for Will M. (Screwballs), who put a ball in play down the first base line that the first baseman could not handle. That tied the score at 7-7, but the first base side couldn’t do any more damage.

Despite having given up their brief lead, the third base side hung tough and blew the game wide open in the bottom of the fifth. The first base side had a difficult time throwing strikes, and when the ball was put into play, the defense couldn’t make the plays it needed to. The six runs put up that inning was the most in any inning of the game, and helped put the game out of reach.

The trio of Landen H. (Fastballs), Lance H. (Screwballs), and Jonah S. (Changeups) came in to set down the side in order in the final inning, preserving a 13-7 win for the third base dugout. Lance was named the All-Star Game MVP for his efforts, primarily on defense, where he caught most of the game and helped lead a beautiful relay to get a runner out at home in the middle innings. He dropped a sweet tag down on the baserunner trying to score, which held the game close and started turn the tide in favor of his team. Congratulations Lance, and all the BABL AA All-Stars on a heck of a game! 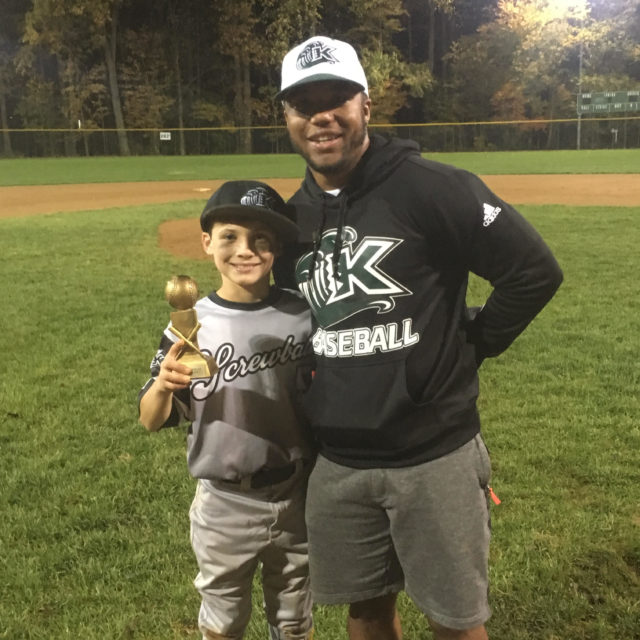 With the game done, we have officially reached the end of our Fall 2017 BABL season! On behalf of everyone in the baseball department here at Koa Sports, I would like to thank all players, coaches, and parents for helping make this season so successful and memorable. Our mission – Shaping Kids’ Lives Through Sports – is something we take very seriously here at Koa, and this season was one of the best we’ve had in recent memory. Thank you players for your commitment, thank you coaches for your hard work, and thank you parents for your support!

Until next season, this is Aidan Edelman, signing off.