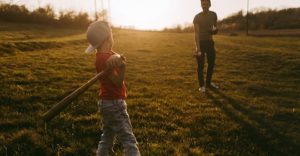 When signing your child up for Tee ball in Bethesda, MD at Koa Sports, parents may ask us about how tee ball differs from little league. If you were to take a short glance, a game of tee ball probably looks like a chaotic scene of piles of bats and kids running the wrong way. However, tee ball is a game created with elements of real baseball in mind, it is just aimed more with the intention of teaching fundamentals that don’t have anything to do with winning or losing, so children can have more fun!

Here at Koa Sports, our tee ball team is geared for children between the ages of 4 and 7 years old. By signing your child up for tee ball in Bethesda, they can learn to love the game without worrying about the competition aspect. Children swing at the ball which is placed on a tee so it is easier to hit, and every child plays the entire game without much concern for the score.

Here are some of the main differences between tee ball, little league, and even the big leagues!

How Many Players are On the Team

A standard baseball team has nine players on the field at once, with players to sub in as needed. As a comparison, major league baseball has twenty five players, little league has around a dozen, and tee ball only requires six to ten. Maryland tee ball at Koa Sports has much less players so that each child gets plenty of time playing!

Positions So That Everyone Can Play

Tee ball is set up so that players have something to do constantly, and each child can get some time in every position. The majority of tee ball leagues state that one player only is permitted on the mound at a time. Infield positions are flexible, and are usually divided based on three zones: the left, middle, and the right. Our couches at MD tee ball in Bethesda rotate players through every zone and position so no one is bored or feeling left out.

While tee ball games can last nine innings, most are stopped at four (or at about an hour of play). We also ensure that every child plays so there are no “benchwarmers”. Depending on what league you have your child join, they may enforce the rule that all batters hit each inning, or play based on the three-outs rule of standard baseball. In tee ball, most kids just keep swinging until they hit the ball and it lands somewhere within the field of play.

How Far Bases are Set Apart

In the major leagues, bases are set at 90 feet apart and in little league, bases are placed in running paths of 60 feet. Lastly, for tee ball bases are separated by 50 feet, and runners cannot leave the bag until the player batting makes contact with the ball.

At Koa Sports, we understand how important joining a tee ball team in Bethesda, MD can be on a child’s growth — so please don’t hesitate to contact us to find out more about signing up!