With tryouts just around the corner, your skills will be put to the test. Tryouts are always a very exciting time, but can also be very nerve-wracking!

What can you do to bring your A game?!
Preparation is key to make sure you bring your best performance to the tryout.

What do coaches look for during tryouts?!
Coaches want players to come prepared to do their best and play at optimal performance!

Once tryouts are over, what happens next can be the hardest part for both coaches and players. Everyone receives either an email that joyfully explains they made the team or an email that says they were just short of accomplishing their goals.

We have all been there!

I want to personally share an experience I had regarding tryouts. When I was a freshman in college, I tried out for one of the USA Indoor Teams. When my coach recommended that I should tryout, naturally I was super excited, but also terrified! As soon as I arrived at the tryouts, I noticed that I was a lot younger compared to the other players. But, instead of turning away and giving up, I tried out and gave it my all!

After the tryouts were over, I thought I had played well. Little did I know, there were a lot of good and talented players there. Unfortunately, I was not selected to come back for another tryout, and to say I was sad and disappointed is an understatement. However, looking back on the tryout, I now realize that I needed to grow and develop more as a field hockey player. The players who had been selected were more experienced than me. They had more years of playing. But, of course that did not stop me though!

Don’t fear failure! Embrace it! Let it make you stronger and be the spark that lights your fire. I am so happy I went to that tryout. Just because I didn’t make the team didn’t mean I wasn’t good enough. It meant that I still had a lot of field hockey learning and growing to do.

Whatever happens in the end, whether you get the “You have been selected” or the “I am sorry to inform you…” email, leave the tryout with your head held high. Leave it knowing you gave it your all and be proud of yourself for going through with the process. Let it make you stronger!

We are looking forward to the Winter season and improving and growing Koa.  We hope to see you at tryouts!!

Our players at the 6th – 8th Rec League playing in a scrimmage! 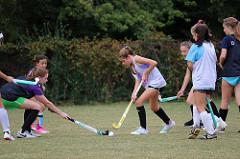