A Day in the Life of Rec League!

Ever wonder what goes on at our 2nd – 8th grade Rec League? Well read no further, you have come to the right blog!

Our rec league is a 7 week program that is devised to help teach and improve the fundamental skills of field hockey. The program incorporates a 45 minute practice and a 45 minute scrimmage each week. All of the players are separated into teams that train and play together! The players even have the opportunity to play with their friends and even make new ones during the season!

Below are excerpts from each age group about what happens during their practice or game!

Our 2nd – 3rd grade teams the Dolphins and Starfish, started their practice with a game called Line-Tag! Next the players warmed up their skills with an obstacle course that incorporated dribbling, pulls and passing. After, each player took a turn practicing their lift into goal working on their form and power behind the ball. The next drill was the Numbers Game. Each player is given a number in this case from 1 – 3. Each team starts passing and once a number is called each player that has that number goes to the other team and plays defense trying to steal and intercept the ball!! Finally the players scrimmaged which ended in the Dolphins winning 3 – 0!

Our 4th – 5th Grade Game of the Week was the Elephants vs the Tigers! The game started with each team coming out strong and working hard to score. The Elephants came prepared to win! The first goal was scored by the Elephants with one of the players on a breakaway to goal, pulling by an opponent and shooting on goal! In the remaining minutes of the 1st half, the Elephants scored two more goals and ended the half with a 3 – 0 lead. The 2nd half started with the Tigers trying to make a come back! They had lots of scoring opportunities, but couldn’t stop the Elephants from stealing the ball, dribbling into the circle and scoring. After 5 goals scored against them, the Tigers couldn’t end the game without scoring! A Tiger player dribbled the ball into the top of the circle, shot and scored! The final score was 6 – 1 with the Elephants taking the win for Week 6!

The game of the week for 6th – 8th Novice was a crazy game!! The Tigers vs the Terps game was a game not to be missed! Both teams displayed great skills! The Terps team was great at getting open, communication and taking shots on goal. The Tigers team was aggressive on defense and good at using the boards to pass the ball up the court. The 1st Half was all about the Terps. They scored 4 goals within the half. Their goals came from great connecting passes and quick shots to the goal! The 2nd half was all about the Tigers making a comeback! The Tigers first scored by a self-pass off the boards and made a direct shot after dribbling into the circle! The next few goals scored were by both the Tigers and Terps with a back and forth scoring! After the Terps scored their 6th goal, the Tigers came back and scored 5 goals!! The 5th goal was scored by one of the players stealing the ball from a defender and taking a shot on goal. To end the game, the Terps scored one more goal which tied the game at 7 – 7!! This was a high scoring game with a total of 14 goals between the two teams!

The final session of the evening is the 7th – 8th Experienced Group. The game of the week was Argentina vs Netherlands. Argentina had good stick skills such as, pulls, passes off the boards and spins!  Netherlands had good defensive stops and the players were always open to receive passes from their teammates! The 1st half started with Argentina scoring the first goal! The player pulled around a defender and took a reverse shot on goal. Team Netherlands answered and scored the second goal of the half. Their player received a pass in the center of the circle, pulled around a defender and took a reverse shot on goal. Netherlands didn’t stop with one goal! They scored again with a quick give-and-go pass that ended in a shot. To end the 1st half, Argentina came back and scored by taking a shot on goal and another player tipped it into the goal ending the half 2 – 2. During the whole second half the teams tried to fight and score, but in the end neither team scored again! Each team was equally matched which resulted in the game ending with a tie 2 – 2. 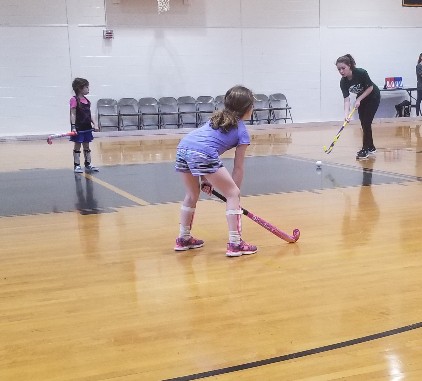 2nd – 3rd Grade Dolphins players passing the ball with their coach Samantha in the Numbers Game!

Stay tuned for next week when we announce our champions of the 2018 Winter Rec League!